What happens when Amazon becomes an integral part of the economy and culture of a community? And what does the outcome say about the tech giant’s larger impact on the world?

This week on the GeekWire Podcast, we explore the double-edged sword of the company’s rapidly expanding fulfillment and distribution network, through the lens of its large footprint in Southern California’s Inland Empire. We also consider the future of its workforce in the buildup to a pivotal union vote in Alabama, and growing wave of robotics and automation.

Our guest is journalist Erika Hayasaki, whose piece, “Amazon’s Great Labor Awakening,” in the Feb. 21 issue of the New York Times Magazine, explores the impact of the pandemic and Amazon’s unprecedented growth on its workforce and the place where she lives. Hayasaki is a freelance writer based in Southern California who teaches in the Literary Journalism Program at the University of California, Irvine.

Listen below, or subscribe to GeekWire in any podcast app, and continue reading for key takeaways.

The genesis of the piece was a simple observation, and a question.

“I started looking into Amazon and its presence in the Inland Empire about two years ago, just from being in the area and driving around,” Hayasaki said.

“It really started with the question of, ‘Hmm, there’s a whole lot of Amazon everywhere I go.’ Amazon trucks, Amazon planes,” she said. “Amazon had teamed up with Lennar to create smart homes that had Alexas and Ring doorbells. There were these giant warehouses pretty close to where I lived. I just wanted to find out how it ended up here, why it was so present.” 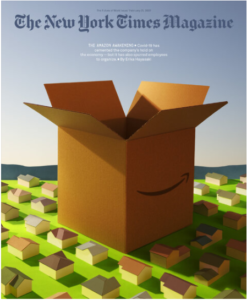 Hayasaki witnessed Amazon’s growth first-hand in the course of her reporting: “When I started reporting this story, Amazon had 20,000 workers in the Inland Empire. Two years later, 40,000. Doubled within my reporting period. That’s incredible to me.”

That growth reflects a larger story. Globally, as of the end of 2020, Amazon employed nearly 1.3 million people, an increase of 500,000 employees in the past year. In California, the company employs more than 153,000 people, making it Amazon’s largest state for employment, rapidly outpacing Washington state, home of its Seattle headquarters.

“There is that conversation of what Amazon brings to a community that is in desperate need of jobs, but at the same time, at what cost?” Hayasaki said, citing concerns about working conditions and environmental impact. “You hear that back-and-forth all the time between the city officials or the public officials, Amazon itself, and then the people who are in the trenches working, or working on worker rights, or just trying to survive day-to-day.”

In Eastvale, Calif., the community at the center of her story, officials originally believed that the Amazon operations would result in a windfall of tax revenue, but because of the way California splits those proceeds among different counties, they came to realize that they wouldn’t be getting as much as they envisioned. Meanwhile, they found that the presence of the facilities required additional resources in terms of law enforcement and road maintenance.

While city officials were careful to say they welcome the Amazon jobs, Hayasaki said, they also felt that there should be more financial return to the community, especially given the amount of money Amazon has been making as its e-commerce infrastructure becomes even more vital during the pandemic.

In the piece, Hayasaki quotes one former Eastvale mayor, Todd Rigby, saying the company is “utilizing our services but not necessarily paying its fair share.”

This echoes some of the concerns that I’ve heard, on a smaller scale, from people in my own hometown, Orland, Calif., where the company is planning to open a Delivery Station. Amazon was able to use a non-disclosure agreement with the landlord, and a streamlined permitting process with the county, to plan the facility largely under the radar, without opportunity for public input. In some ways, the anecdotes in Hayasaki’s piece validate concerns I’ve heard in Orland in the course of my own reporting.

Working conditions are another issue. In the past, Amazon was able to avoid unionization of its workforce, but the pandemic proved to be a “breaking point,” she writes in the New York Times magazine piece: “Some workers were no longer willing to make concessions to a company that they felt was jeopardizing their safety and potentially their lives.”

A landmark union vote now under way in Bessemer, Ala., could prove pivotal.

“I’m really watching Alabama closely,” Hayasaki told us. “The push against the unions is very strong by Amazon, according to the organizers on the ground. … At the same time, there will be these mail-in ballots. So that might make a difference. They’re not going to a facility. They can vote in the privacy of their home and send it in without feeling the pressure of going into a place to vote in front of everybody.”

RBC Signals raises $1.2M to get ready for the coming boom in…

Week in Review: Most popular stories on GeekWire for the wee…